The business narrative of this pandemic has been if/when staff will return to their corporate offices and, for smaller firms, whether they will survive. The response to the latter perhaps is "stop worrying."

A report this week from the describes the SME sector as being robust, especially those long-established family-owned businesses rooted in community values. (The institute is a thinktank run by Credit Suisse.)

In its report Credit Suisse Family 1000: Post the Pandemic, the firm found that family-owned businesses outperformed their non-family-owned peers in every region and sector and were remarkably resilient to COVID-19’s effects.

Using a proprietary database of more than 1,000 publicly listed family - or founder-owned companies - the Swiss wealth manager has found that since it began monitoring in 2006, the overall “Family 1000” has outperformed non-family-owned companies by an annual average of 370 basis points. Results in Asia-Pacific, excluding Japan, have seen the most impressive headway, with compound returns of more than 500 basis points a year, followed by Europe at 470 basis points.

“Our research to date highlights that family-owned businesses pursue a longer-time horizon in their investment strategy, delivering more stable and superior through-cycle profitability, and ultimately driving significant excess returns for all shareholders,” the report said, in an old-fashioned nod to cutting your cloth according to your means.

Family-run businesses, although overshadowed by large cap citadels that grab attention, are the backbone of most national economies, and a macro view of how they are navigating this difficult year is a good indicator of how economies as a whole are going to emerge from the pandemic.

“We found that the traditionally more conservative financial model of family-owned companies built on lower leverage and stronger cash-flow generation has proven to be an asset. They have notably relied less on government employment support to furlough their workforce, implicitly reflecting their own social responsibilities,” Eugène Klerk, head of global ESG research product at Credit Suisse, said. 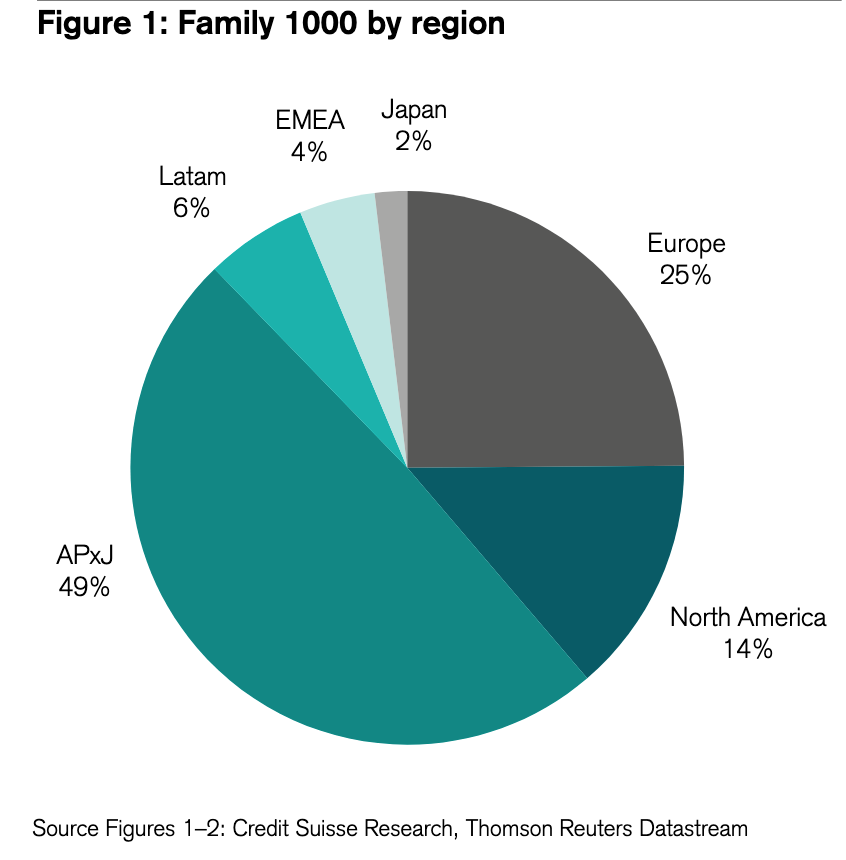 Family-run Asian businesses dominate
As the chart above shows, around 50 per cent of companies on the database are in Asia. Across 12 markets, including Japan, APAC holds a 51 per cent share of all businesses, comprising 540 companies that contribute $5.56 trillion in the region.

Breaking this down further, there are 159 family-owned companies in China (worth $2.48 trillion); 71 in Hong Kong (worth $505.1 billion), and 111 in India that make up the top three jurisdictions and 70 per cent of APAC market share, with a combined market cap of $3.9 trillion.

Performing better on ESG
On average, family-owned companies tend to have slightly better ESG scores than non-family-owned, leading on “E” environmental  and “S” social scores but lagging on “G“ governance as this chart shows. 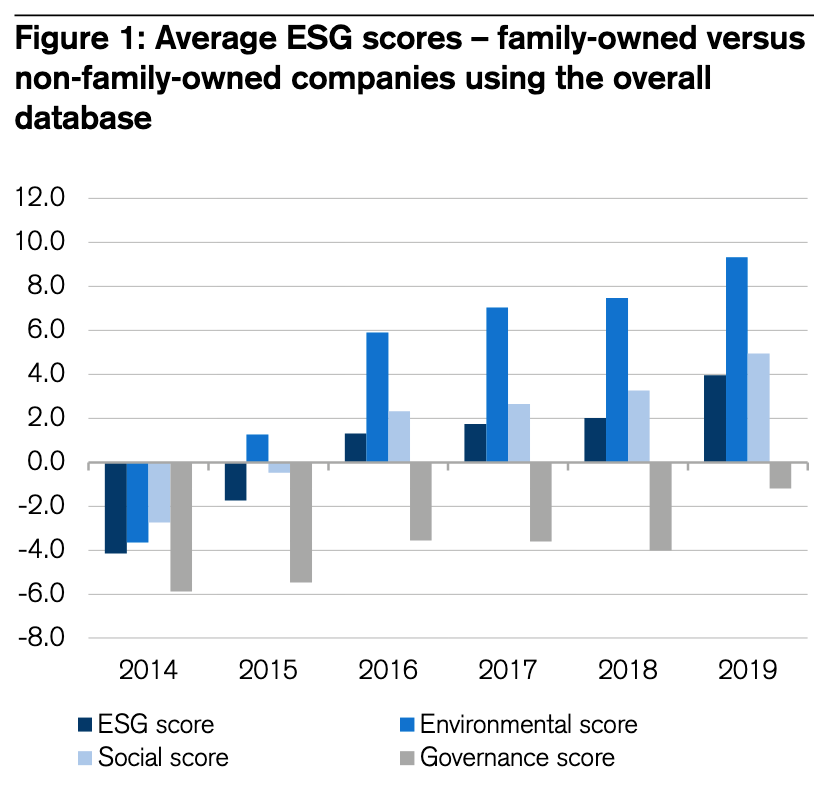 Beginning to match European standards
Not surprsingly, European family-owned companies shine in this area, scoring the highest for ESG of any region. But data suggests that APAC (ex-Japan) family businesses are scoring better on ESG than their US counterparts and rapidly closing the gap with Europe.

Older companies score better on ESG than younger ones
This is another interesting revelation, which the report suggests is down to older family-run companies having more established processes that allow them to address issues not tied directly to the bottom line but still relevant for business sustainability. It is also likely that younger businesses striving to establish a foothold are pushing back on sustainability issues, from supply chain operations to labour practices, seeing compliance in these areas as costly near-term burdens.

COVID-19 impact on the sector
This year, the report also delved into the exceptional circumstances thrown up by the pandemic. Eyes are particularly looking at how different regions have managed disruptions, and what the economic and social shocks have done for ESG uptake as the new byword for business resilience. Reports on how well Asia has been integrating ESG into investment processes and company practices have been mixed.

Credit Suisse reckons that in spite of the pandemic putting more emphasis on social aspects, research found that family-owned companies trail their non-family-owned peers on a host of ESG measures, most noticeably on human rights and modern slavery-related policies. On average, they also have less diverse management boards. Fewer of them have support groups for the lesbian, gay, bisexual and trans (LGBT), black, and Asian and minority ethnic (BAME) communities, or have made any public statements related to United Nation principles.

Again, looking at how roughly 300 individual companies have ridden the COVID-19 crisis, the report found little difference in approaches. Even though both sets suffered revenue losses, family-owned companies were slightly less worried about their future than non-family owned. They were also less likely to furlough staff (46 per cent versus 55 per cent) and more likely to have put support programmes in place, more so than businesses in Europe or the US. Although this may be because the US and European governments have pumped in massive support packages. 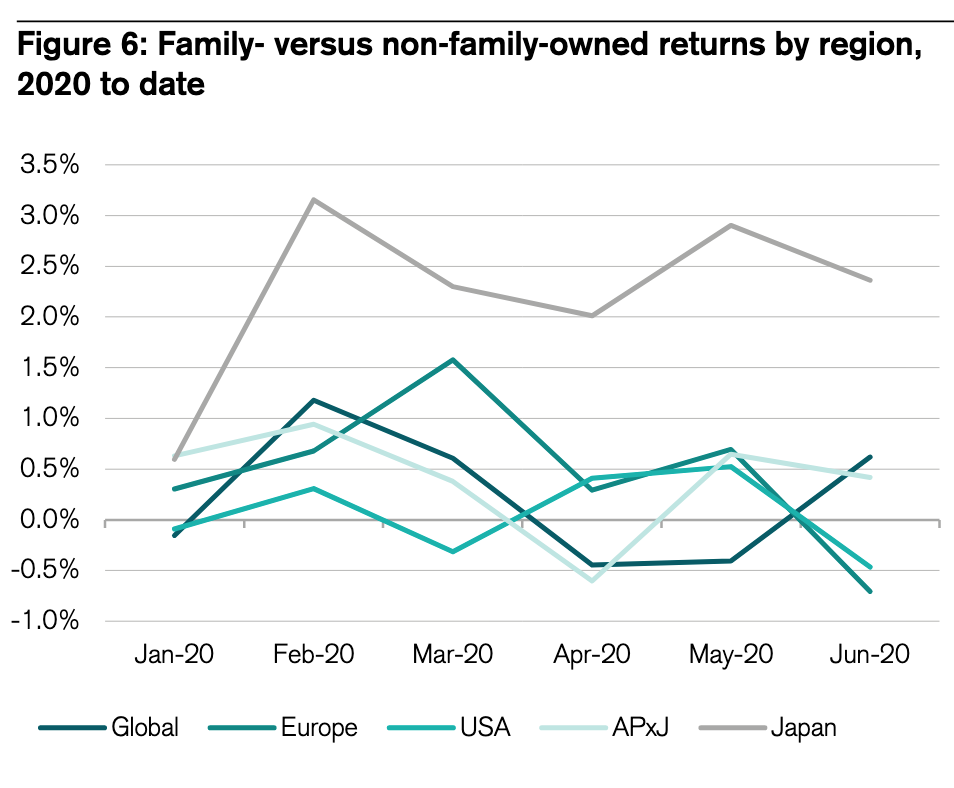 As these schemes unwind, it raises the question of whether Asian companies, already less reliant on state intervention, are going to bounce back more vigorously than other markets.